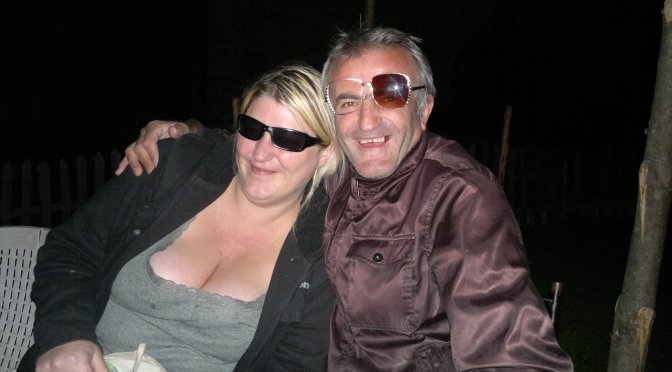 As you no doubt know, one of our favourite travel activities is finding grotty little dive bars in which to talk the toot to drunk old men. The grotty dive bars thing has long been a tradition (as we would rather stay away from the touristy places and get to know some of the locals), and we didn’t really give much thought to the old men part until we were in Estonia earlier this year, reading through the “In Your Pocket” guide to Tallinn and noticed “Vaali Bar”, a “small and stinky local institution” promising “cheap drinks and unusual elderly regulars” and thought that sounded right up our street (declaring “I love talking shit with old men!”, “I love talking shit to old men too!!!!”) and our great night there with our new friend Aaaaaaaarrrrrrnie, that we decided that we should make more of a conscious effort to meet more old men and make it part of our mission statement and core values.

Looking back, we’ve had some of our best craic with old men! Drinking beers in a record shop in Tulum (Mexico), driving around the castles of Transylvania (with beers, obviously)…and our favourite occasion when, after being warned that the men in northern Albania were dangerous and would kidnap us, we happened upon a hut halfway up a mountain near Thethi where the old mountain men within greeted us warmly, offered us beers and we had a fabulous evening drinking, playing dominoes and chatting in broken English/Albanian – these are some of our greatest old men times! So, we thought we’d put together a list of reasons why old men are the best.

1. Old Men Have No Hidden Agendas
As two girls travelling on our own, we’ve had so much experience of drinking with lads our own age or younger where after a few hours of good conversation, drinks and bonding on what seemed to be a completely platonic level, the gentleman in question starts with the puppy eyes, over the top compliments and wandering hands. Even when we’re surrounded by wall to wall, drop dead gorgeous local girls! It’s always a shock to us when in a sea of willow-limbed Eastern European nymphs or slamming Latino hotties, that anyone would single us out as the ones they want to pull – the large breasted, middle-aged, cackling , beer-demanding, animal touchers that we are! Obviously English girls have somewhat of a reputation in other countries (especially ones from the North East – but we doubt that Geordie Shore has reached most of the places we choose to go. Although it is big in Australia by all accounts!), and maybe the local lads have grown fatigued with the native beauties on offer and jump at the opportunity to try some more (albeit a bit poor quality in our case, and probably with maggots in it) exotic meat, in the way that Jill got really excited in Lidl the other day when they had kangaroo steaks for £3.99. This is almost never a problem with old men! Even the most pervy will just make some “if I was 30 years younger” type comment while staring at your cleavage and throwing a few “Sho Mir’s” your way, or sing a bawdy song. There’s no need for awkwardness or offending with rejection of advances and you can relax and have a laugh. And if they do try to leave a bar with you, it’s usually because they want to see you to the door of your hotel and make sure you got there ok. *
*obviously there are (not good dubious)-dubious old men out there (*cough* Cyprus, *cough*), but they are the exception rather than the rule and as always you should trust your instincts when they tell you someone is a wrong-un’!

2. Old Men Have No Pretensions
Like us, most old men aren’t out to impress anyone – just to have a good laugh, enjoy some beers, talk the toot and hopefully make new friends. We’ve never had an old man boast about his expensive car or successful career or turn his nose up at our eccentric (and usually on our travels, pretty dishevelled) dress sense, outspoken opinions and idiotic sense of humour. We’ve never had an old man drag us to the hot night spots (you know the places – usually bigged up in the Lonely Gannet as “hip and happening” or “where the beautiful people of *insert location* go to see and be seen”, where you end up paying a cover charge, , queueing forever, squished like a sardine for an overpriced underwhelming cocktail and then downing it on the spot and leaving as the music is shite. The very thought of these places bring us out in a rash!), they will take you to other dubious local bars, to meet more lovely new people!

3. Old Men Know Everything
Well, everything locally! From the local folklore, politics and history (that they may well have played a part in), to the best places to eat and drink, your elderly friends will happily answer all your questions and tell you all their amazing stories. No one is going to know a place like someone who has lived there over sixty years! Also, of course they know all the local gossip – especially that pertaining to the other regulars of their favourite bars- and after a few drinks you will feel like you know everyone’s business; who is there with their secretary and not their wife, who got drunk and fell in the river last night…

4. Old Men Know Everyone!
The old men regulars are part of the furniture in pubs and bars throughout the world and know everyone who comes and goes on a regular basis, so don’t be surprised if while drinking with your new friends, your social group constantly expands throughout the evening as more people come over to say hello or the old men decide that you simply MUST meet a certain one of their acquaintances. There will be the inevitable dragging over of the one chap (or lady) that speaks decent English (if your local lingo isn’t up to much, which ours usually isn’t sadly) to help out and constant banter with the other regulars and bar staff – even if you are leaving the next day you will end up being embraced like a long lost brother or sister, and if you’re lucky you could be allowed to stay back after hours for a lock in. The old men will introduce you to all the local talent, so even if you are wanting an amorous encounter with a local girl/boy – still make time for the old men! The best things come to those who make friends with old men. I think Abraham Lincoln said that.

So there you have it. Next time you are somewhere new (even in your own country) – make a beeline for the nearest grubby dive bar and befriend some boisterous and approachable old men! Let’s just keep it between us though – if the likes of Lonely Planet* get wind that talking shit to drunk old men is the new big thing, then it won’t be long before Old Man Tourism is the new Sex Tourism and our favourite far flung destinations are overrun with stag and hen parties and the likes of you and me won’t be able to find an old man to talk to without paying him €20 an hour, and then he won’t even enjoy it any more as he’ll be exhausted with talking the toot to tourists all day and night to make money to fund his drug habit. So think on, eh?
*Oh and that Michael Bay – don’t tell him either. He’ll f*ck it up