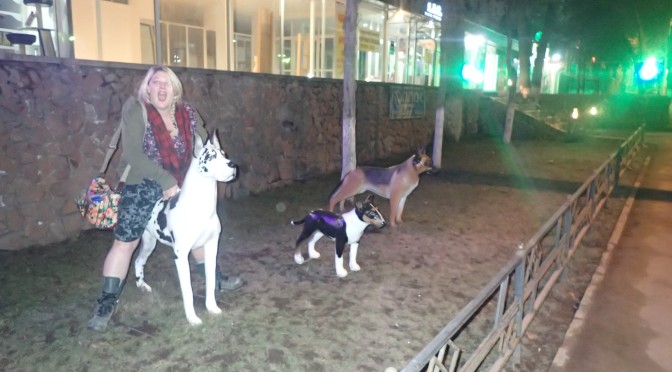 One of the few drawbacks of travelling from place to place (especially at the speed that we do) is that it often you fall so in love with a place and its people that it breaks your heart when you have to move on. The big killer for us though is the gorgeous stray dogs we meet on our adventures that we would love to let tag along for more of our travels, or in some cases Susan has actually started looking into the logistics of organising to adopt them and take them home to Ireland! Here are the top dogs that stole our hearts (and most likely some of our dinners):

We met little Nob Island shortly after we got off the boat from La Ceiba to Utila. We had no accommodation booked but had decided on a hostel that unfortunately was closed when we got there. As we spent a bit of time outside knocking on all the doors/windows trying to get someone’s attention (it was the middle of the day), we entertained ourselves petting a lovely little stray scamp that was hanging around in the street. As we gave up and decided to find somewhere else, little Nob Island (named after our nickname for Utila – because our trip there unfortunately collided with US Spring Break, and it was therefore full of Spring Break nobs) followed us.  She was our road companion for pretty much the whole day (us having resorted to the usual “we’ll go and have a beer and assess the situation” that usually happens when we haven’t found anywhere to stay), exploring the island and stopping off at various bars, sharing our nibbles and ordering her a bowl of water wherever we went. Susan was completely besotted, and was using anywhere with wifi to Google how to transport a dog from Honduras to Ireland.  Eventually we decided on the apt sounding Hotel Margarita and went back to relieve ourselves of our backpacks, but on arrival the owner (the commanding Miss Carmen), took aversion to our little furry friend and chased her away with a broomstick. We understood her not wanting a flea-ridden stray dog in her nice clean rooms, but she could have just slept on the bench outside and there was NO NEED to hit her with a stick! It almost made us leave the hotel we were so annoyed. Despite much searching we never saw little Nob Island again and it breaks our hearts to this day. We do console ourselves with the fact that, lovely though Susan’s apartment in Dublin is (and right next to the park!) she would only have been disappointed when she was used to a beautiful Caribbean island.

On our first night in Kiev, we’d had a great evening getting drunk, making new friends and talking the toot in Palata #6 -an amazing dive bar where the bar staff are dressed as doctors and nurses, serve shots of vodka from syringes and do a crazy traffic light shot challenge that involves having to down 3 shots while wearing a helmet that is set on fire, being hit over the head with a beer barrel and someone blowing a whistle and shouting at you (seriously, have a look on Youtube). When we’d gone outside for a smoke, there was a lovely HUGE fluffy bear of a stray dog roaming around, just saying hello to people and wanting to play. Despite her humongous size, Giant Mini Kiev was obviously not more than a puppy and her and Susan had a great time play fighting and cuddling and yet again we ended up thinking about the feasibility of the Dog Relocation Unit. According to the internet, it would be six months or so before she could bring her back to Dublin, so we made our friend Andre The Banker promise to feed her a kebab every time he went to Palata#6 (after first trying to get him to take her home, but it turns out he hated dogs and like a good Ukrainian, was scared of any diseases a stray might have).

One of the things we were most looking forward to on our visit to Nagorno-Karabakh last year was our planned stay in the outrageous “Hotel Eclectica” in Vank (the one shaped like the Titanic in a tiny village in the middle of nowhere), but unfortunately when we arrived we found the place was a building site as it was getting renovated in preparation for the summer. As we were hanging around while the driver was talking to the staff to find out what the score was, we were approached by a skinny and bedraggled but adorable little wooly fella, who we shared some of our car snacks with (Jill always brings emergency road sausage) and played with.  Sadly it turned out we couldn’t stay there and had to head back to Stepanakert, and as we drove away we weren’t sure what we were most sad about – not getting to stay and explore Vank, or having to leave the scruffy little scamp behind!

4. The Lovely Handsome Chap in Budvar, Montenegro 2012 (we don’t think he was a stray so we didn’t give him a name)

We hadn’t even meant to GO to Budvar…we were supposed to be on a night bus to Sarajevo that night but after a logistical nightmare of missing a train, nearly hitching a train and then hitch-hiking the length of Montenegro in the hope we could find more Sarajevo-destined travel options, somehow we accidentally found ourselves in Budvar at about 1am. We were a bit pissed off with ourselves (missing the train from Bar to Podgorica was all our own stupid fault for not changing the time zone on the laptop we were writing on) but it had been a hilarious adventure and we decided as usual that since we had nowhere to stay and had no clue what we were doing, we would head for a bar for a cheeky little big fella and to formulate a plan. We had a huge bottle of wine (and Susan insisted that despite being in a bar and not at the roadside she wasn’t giving up on hitching the rest of the journey, so had attached a piece of paper saying  “SARAJEVO” to the side of her head with a hair clip) and we met this gorgeous little fella whose lovely eyes just made our worries melt away! If only he had accompanied us later when we ended up having to break into someone’s house to sleep like Goldilocks…

5. This Gorgeous wee Fella, Erbent, Turkmenistan 2015 (we didn’t name him as he had owners)

We were very excited about our visit to Erbent, a nomad village in the middle of the Karakum desert en route to DJ Gas Crater, where we were expecting to meet the locals and hopefully get to milk a camel and meet some of their famous Tazy hunting dogs. Unfortunately our guide, Mr. Dima, was total shute and just dropped us by a sand dune and left us to our own devices, feeling really crap about wandering around this close knit community peering into windows. Fortunately though there were plenty of animals to touch so we got to stroke a camel (with bonus baby camel!), a sheep and this sweetheart of a dag who followed us around chewing on Susan’s fingers. Her owners found us all very amusing and it certainly broke the ice a little – we can bond with anyone over the touch of a good dag! 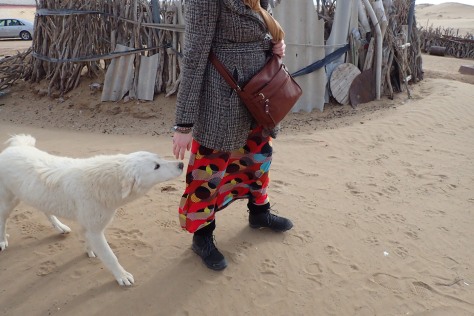 6. All of The Adorable Little Scamps of Bishkek Bus Station, Kyrgyzstan 2015

When you think of stray dogs in cities you tend to imagine big, scrawny, mangy beasts with a look of the rabies about them, but Bishkek’s strays were all little clean and tidy looking scamps (little Jack Russell/Corgi type things), prancing about in little packs around the bus station like something from a Disney film. Even Susan (who usually hates little yappy dogs) couldn’t help but fall in love with them, and we wondered how many we could fit on the bus if we bought and extra seat for the journey to Almaty, and we could have a little tribe of scamps following us for the rest of the trip!

When we arrived on the night train from Dnipropetrovsk to Odessa, we were both feeling decidedly under the weather. Our bargain “3rd class” cabin had been crammed full of snorers (Jill included) and men who thought it was perfectly acceptable to blast happy hardcore music out of their mobile phones at 3am when people were trying to sleep. So not much sleep was had, and the inevitable travel-flu had hit Susan hard. We decided that a walk to the beach might clear our heads, and walking to the beach from the train station takes you through a load of lovely parks full of dogs lying about basking in the sunshine. In contrast to the tidy little scamps of Bishkek, Odessa’s stray dogs are huge big shaggy things – it took a lot of persuasion to stop Susan from just snuggling in with a pile of furry bears and going to sleep, telling Jill to just wake her up when it was time to get the train.

So there you have it, our run down of our favourite dags. if you see any of them around please give them a sausage and a cuddle from us! And we’d love to hear about your best dog encounters in the comments.

One thought on “To All The Dogs We’ve Loved Before…”