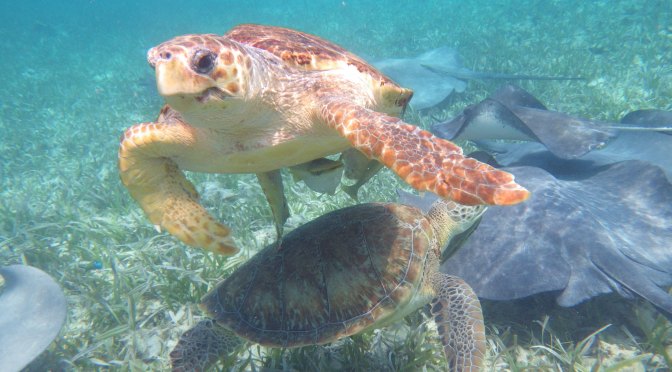 On the 10th March (Susan’s birthday) we woke up as bright and early as we know  how (i.e. about 9am) and realised that we had no idea where the office of the snorkelling place we’d decided on was. Somewhere in between the ATM and the restaurant the previous night, we’d spoken to a woman in a little window selling snorkelling trips and agreed to turn up the next day but alas we’d forgotten where it was, and for all it was a tiny island which pretty much only had one main road and a few back streets, it might as well have been a sprawling labyrinthine metropolis for all our drunken recollection amounted to. So instead, we went to the little hut on the beach near our hostel, “Raggamuffin Tours“, which was pretty much the same deal for the day’s snorkelling. We were handed our masks. snorkels and flippers and headed out to the jetty in search of our boat – “The Ragga Man”.

“The Ragga Man” himself, was Captain Caveman – a jovial Caribbean bloke, who welcomed us aboard along with the other 10 or so passengers, and introduced us to his first mate Chilo (a young latino bloke, with an excellent line in belly dancing). It was a lovely warm, but slightly overcast day and as soon as the sails went up, we were cruising across the sea enjoying the beers we’d had the foresight to buy from the shop earlier (to the envy of the other passengers who hadn’t thought on). Susan mentioned it was her birthday, and another girl on the boat piped up saying that it was her birthday too, so we gave her one of our beers and Captain Caveman lead the whole boat singing them a joyful happy birthday.
END_OF_DOCUMENT_TOKEN_TO_BE_REPLACED