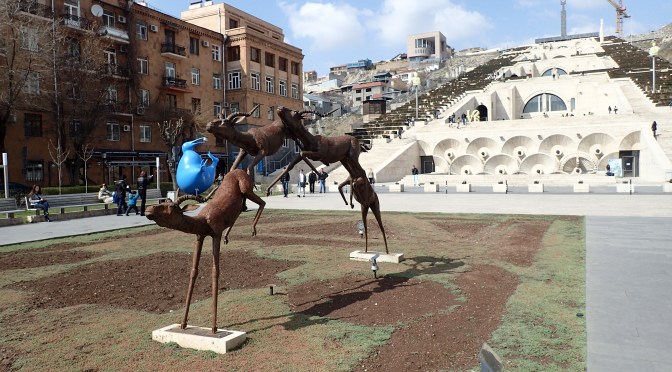 Ah the traditionally heavy St Patrick’s Day/Jill’s birthday night hangover, how we hate you but OH how you are worth it!! Awaking in our suite in Almaty we were really enjoying the luxury with it’s amazing comfy beds (especially Jill’s middle class bed – although sadly they didn’t have any instructions on how to predict an earthquake by observing the behaviour of cats) and black out curtains, so it will come as no surprise at all to hear that we didn’t surface until mid-afternoon. Thankfully our flight wasn’t until 6.30pm (nicely timed, Transaero!), so we just sat on our lovely big balcony drinking minibar boozes in the sun and debriefing each other on the shenanigans of the previous night until the time came to head down to check out, order a taxi and neck a quick vodka and fresh orange at the bar before heading to the airport. We got there in sufficient (not “good” obviously, this is us we’re talking about) time to catch the flight no problem, but there was a MASSIVE queue at passport control, only one window was open and he seemed to be taking ages to let each person through (we thought maybe he was using Tajik security methods of getting a yak to stare at people’s documents) and we were getting very restless and tetchy as we anxiously awaited our turn. 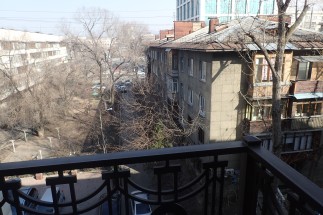 Finally we got through and managed to board the flight just in time. After take-off when the complimentary drinks trolley came round we asked for a beer, which was met with shaken heads. “Wine?”, “Vodka?” and “Whisky?” were also similarly dismissed. Even when we offered to pay extra. Turns out there was only NO BOOZE on the flipping plane! This was just not cricket, as we were in dire need of a mender and it was over four hours to Moscow (that we were actually allowed to go to this time as our connecting flight was with the same airline so we were “officially” transitting). Four miserable hours, that we spent mostly bitching about the lack of booze or trying to nap. Very badly played Transaero! We had thought better of a Russian airline!!

END_OF_DOCUMENT_TOKEN_TO_BE_REPLACED 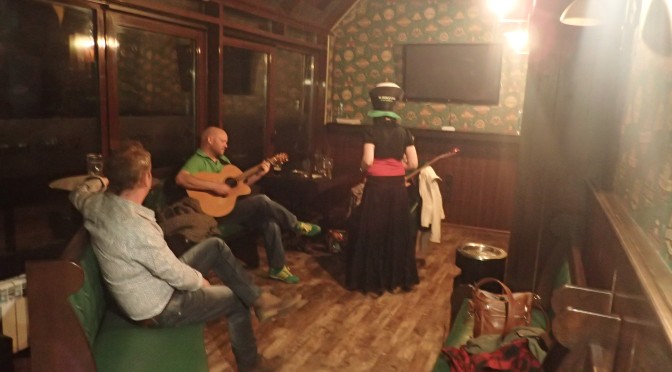 We had a nice whole luxury day in Almaty, and we had two main objectives to achieve. Firstly, we needed to find somewhere where something was likely to be going on that night for St Patricks’ Day – it is now a tradition of ours to hit up the Irish/ex-pats bars (i.e. the places we usually avoid like the plague) wherever we are in the world on Paddy’s Day. Secondly, we wanted to buy some Kazakhstan ice hockey jerseys to wear at the next IIHF world championships, so were on the lookout for some kind of sports/merchandise shop. We’d asked at the hotel reception about the latter, but they looked at us like we’d just vomited up a live cat and said they didn’t know.

We got a couple of beers from the shop near the hotel and sat on a wall in the sun, trying to formulate a plan of action. Looking in the Lonely Planet, the most likely candidate for the first objective was The Shakespeare – a “pub” themed pub that was popular with ex-pats. It looked about a mile away, but the route cut through the main shopping streets so we figured that we’d have a leisurely wander by that way and hopefully come across some shops selling ice hockey jerseys on route. 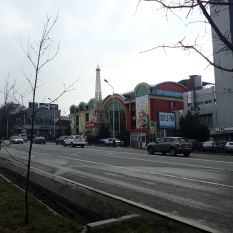 No jerseys but a mini Eiffel Tower 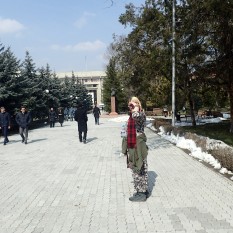 Sprawling streets in the hunt for St. Patrick

Almaty was a very lively place, and much more cosmopolitan than any of the cities we’d visited so far this trip. It was however, still very much the sprawling soviet style with huge blocks, massive roads and official looking buildings. Oh how we yearned for a nice little cobbled old town with windy streets and courtyard bars! We eventually found it after walking for ages, discovering that the Lonely Plant map had the pub on the wrong corner and having to use the wifi from somewhere to finally get there.

END_OF_DOCUMENT_TOKEN_TO_BE_REPLACED 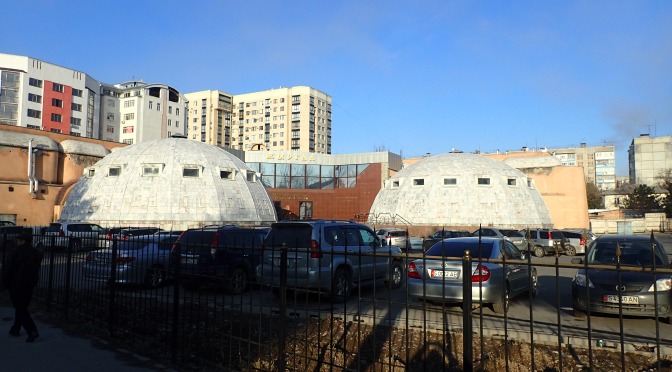 Today we were supposed to be waking up in a little private cabin on the beautiful Chopin Alta lake then horse trekking up in the mountains before heading off to spend the evening in Tian Shan observatory in Ile-Alatau , Kazakhstan (another gorgeous mountain lake) but due to the mugging incident in Osh we were a day behind and had to miss out on our 2nd lake of the trip! However we refused to get down about it and were still elated from finding Jill’s passport and bag buried in the woods so decided to make the most of enjoying our bonus sunny day in Kyrgyzstan’s capital, Bishkek.

We got up at quite a respectable time (for us), went for a wander around Bishkek and somehow seemed to find ourselves in some kind of bizarre hardware district, where all the shops and market stalls were only selling light fittings, scrubbing brushes, paint etc.! On the off chance we asked one of the stall owners (in our chut-chut Ruski) if he had any plastic cups, as we’d been sans cups for too long and we’d come to the conclusion that maybe this was the root of our recent misfortune. He brought out two plastic kids mugs, one with Winnie the Pooh characters and one with Disney Princesses on – perfect! We grabbed a bottle of beer at the nearest little kiosk and headed off to find Zhirgal Banya, which for once proved pretty easy as it stuck out from the rest of the environment by resembling a pair of large bosoms.  We sat on the wall drinking beer out of our shiny new cups – we figured that we needed to at least have a little bit of beer in us if we were going to get naked in front of a loads of strangers!! Despite the snow the previous night, the sun was cracking the flags today and we had a nice bit sit, watching the world go by and Susan made friends with a fly who was getting drunk on the rim of her cup (Pooh) and tested the macro lense on her new camera (the Olympus TG-3 tough – highly recommended and bonus still hasn’t been stolen yet like her last 2!) before we finished the beer and worked up the courage to go into the banya.

END_OF_DOCUMENT_TOKEN_TO_BE_REPLACED 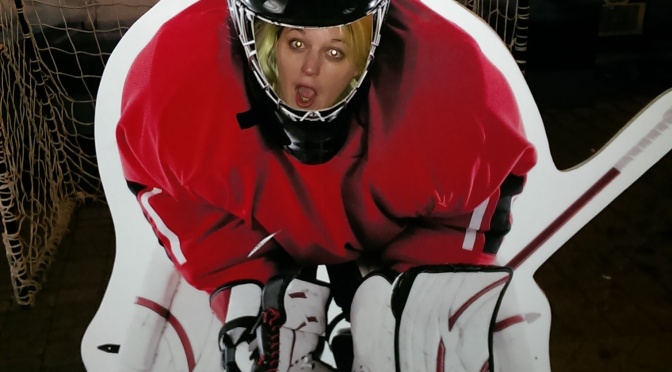 If you are a keen follower of our adventures, you will recall that in our Eastern Eastern Europe Rewangering this year, we really wanted to go to Belarus but you needed complicated, expensive visas to get in. However in May Belarus held the Ice Hockey World Championships, and anyone with a ticket for one of the matches could get into the country without the need of a visa, hence we became overnight fans of the sport and got 2 tickets!

In a complex bit of logisticing, Jill’s flight to Dublin was first thing on the Thursday morning then we had a flight to Oslo at 5pm so we decided to go out and meet Aaron and Ger for some lunch during their break. We had a nice catch up, wine and some mussels at a nice restaurant with a terrace before it was time to taxi to the airport. As an added bonus, Susan had a voucher for Uber so we utilised that to get a luxury car and chauffeur like real ladies. We were met at the bus station in Oslo by Christopher (from Norway – another one of the Amsterdam/Copenhagen gang) and his Australian girlfriend Kirsty and had a few beers in the bar at the station before Christopher proposed that since Jill had never been to Oslo and didn’t have time to see it all, we should go up to the panoramic bar at the top of the Radisson hotel (which was conveniently just across the road) and sit in the window with the good view and they would give an aerial tour of the city. So we did that which was lovely (although we daren’t even think how much the beers we had in there cost, as it’s around £8 for a pint in a normal bar in Oslo! Christopher and Kirsty got them though, since it was their idea to go there and they are used to those prices and less likely to die of a heart attack than us!) and then met Erland, another good friend of Susan’s, and an ‘orrid unt of a man, for some dinner.  It was about 1am by the time we got back to Howie’s (Susan’s torrid gay affair, whose house we were staying at and Erland’s twin brother – he was actually not there at the time as he was up visiting his parents in Trondheim but he and his husband Matthew had said we could stay there and Erland let us in) so we settled down to a nice relaxing two hours of sleep before we had to get the bus to the airport at 3. This was not very much fun as you can imagine – our flight to Vilnius wasn’t until 6.30am but the latest bus that would get us to the airport on time was the 3 o’clock one! So yes, it was very grim but we managed to make it and had a bit more sleep on seats at the airport before the flight boarded.