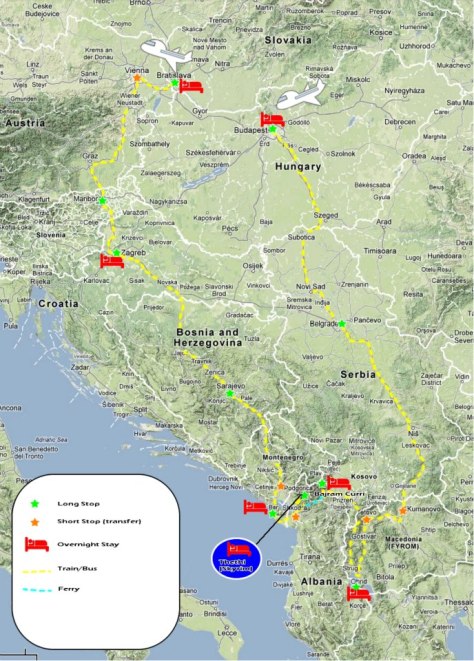 2 girls begin their first micro tourism adventure and get hooked for life. 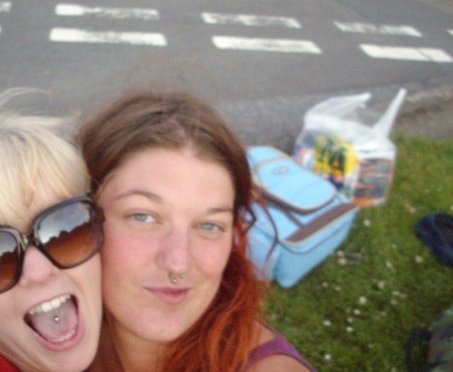 it seemed as harmless as any of our other stupid ideas (you know…”lets hold a rock festival in Joanna’s mam’s field”, “let’s sail to the moon on a raft made out of old Blackberries”), and as likely to become reality…but when Jill, Susan, Lolly and Joe  got drunk last Wednesday night and decided “let’s hitch to Glasto tomorrow and try and get over the wall!” , two out of four of us woke up the next morning still determind to make it happen.Well, we say “morning” – Jill was up morningish after being summoned to the pub by iain, and since she hadn’t heard from Susan by about midday assumed that she had forgotten our “right we’re leaving for Glasto at 9am tomorrow” pledge, and thus resigned herself to a nice afternoon in the King’s Arms beer garden putting the world to rights over some real ales with her favourite hairy amigo…however, Susan rang iain at about 3pm (Jill had yet again lost her phone drunkenly the previous night), asking if she was still up for it. Jill, having topped up last nights beer with the few pints that afternoon, concluded foolishly that indeed yes, she was.So we met up in Savannah, accompanied by Lolly, iain, Joe and Aaron, all of whom we tried to persuade to join us on our expedition but due to work or homosexual commitments they declined. For the best really, thinking about it, as who the hell would pick up Joe or Iain if they saw them trying to hitch a ride at the side of the road? Plus the more of us, the less likely we are to fit in anyone’s car and they seemed reluctant to agree to dish out their fair share of blowjobs to truck drivers, should it come to it.At this point, Jill was still less than convinced that we were actually going ahead with it. But then of course, most of the pub (mainly Grant, Kay, Liam, Damian, Willis and Nick Hell) started piping up about how we were talking shit, would never dare do it and would still be sitting on Savannah’s settee this time tomorrow. Saying thus to Jill and Susan is on a par with calling Marty McFly “chicken”. So, we drank up, said our goodbyes, called everyone tossers, apologised to Nick in case we didn’t make it back for his wedding reception the following day (still thinking we would end up standing by the A19 for an hour, get bored and come home) and set off for Jill’s to get supplies. Grabbed Jill’s lovely camo pop up tent (now affectionately named Raphael, due to it making us look like a kind of ninja turtle when worn on your back), filled a beach bag full of what booze was left lying around the flat, sleeping bag, change of clothes etc. then to Susan’s parents’ to scavenge food. Her parents seemed less than impressed with the plan (although we were a bit economical with the truth and told them our friend was giving us a lift and we weren’t hitching. Uh-uh, not us. We’d even drafted in Joe to pick us up from theirs and take us to the A19 so it would be convincing.) but nonetheless gave us a fine selection of foods to take, and her dad thrust a tenner at us bless him. At about 8pm we set off in Joe’s car. And so it began…The Mission: “Get to Glastonbury and into the festival on not even 1p”

The Rules: You are not allowed to spend any money on getting down to, or into Glasto. You are allowed money on the way (Susan had that tenner from her dad and Jill had a couple of quid change in her bag) but it’s only allowed to be spent on drink and must be spent BEFORE reaching the festival site.