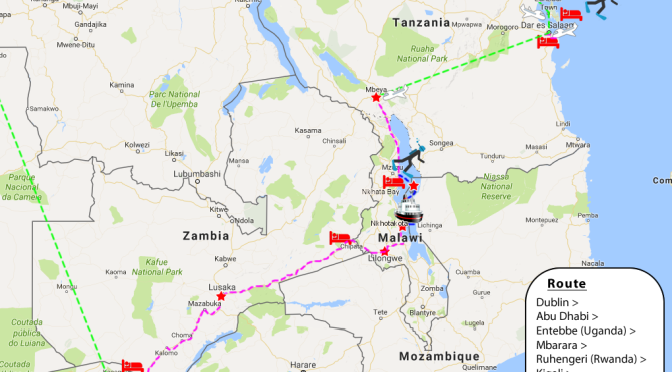 Pinge and Wang present their long awaited 2016 route map! Feast your eyes on all the places we should be next month that we’ll probably miss a flight/train to and end up somewhere else instead. In fact we may as well just throw this map and a few grand out of the window right now. 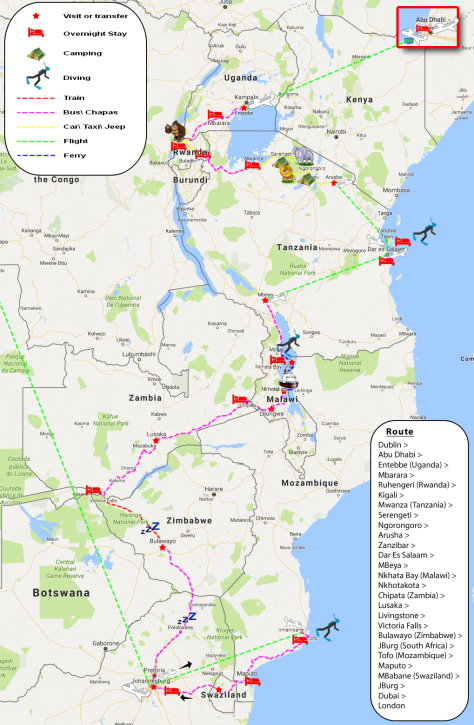 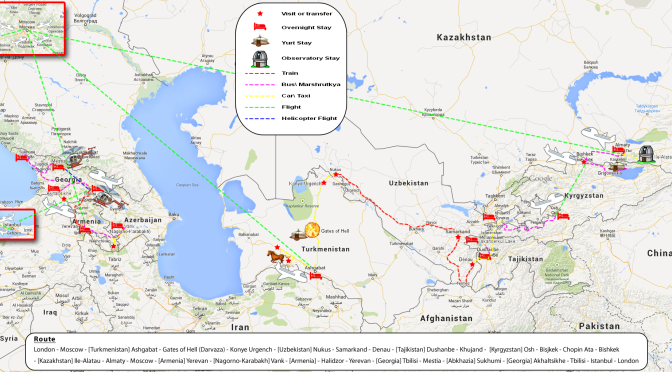 The Pinge & Wang (and friend!) news team will assemble at Gatwick Airport (Susan and Vita flying over from Dublin and Jill getting the train down from Sunderland) to catch the 13:10 Easyjet flight to Moscow, arriving at 20:00 Moscow time. There we have a long eight hour wait before our flight to Ashgabat (at 01:30) so will check ourselves into the lounge to enjoy the complimentary drinks and snacks for a bit, while we use the time wisely trying to get Vita to teach us Russian (she’s fluent – score!).

We land in the Turkmen capital at 07.15 and will be met by our tour guide who will be taking care of us during our time in Turkmenistan. We were reluctant at first to book a proper “tour” package as we always pride ourselves in being able to organise and implement our own logistical plans without any outside help, but in Turkmenistan an organised tour is a necessary evil that you need in order to get a visa. We specified our own itinerary though and the price was quite reasonable, so it didn’t end up too much of a hardship. We are staying in the Hotel Paytagt – the cheapest, most central hotel we could find (accommodation in Ashgabat is surprisingly expensive and there are next to no hostels!) – so hopefully we can dump our stuff, freshen up and head out to explore the city. We don’t need the guide to accompany us in Ashgabat, so we’ll probably have a leisurely wander (interspersed with taking in some local booze) as we head to the main attraction for the day, the Turkmenbashi Tales – a theme park based on Turkmen fairytales! We’ll probably be knackered after the lack of sleep (hopefully we’ll catch a few hours on the Moscow-Ashgabat flight If we’re not too hyper and excited) but we will soldier on and attempt a shot at the night life.

We will spend the morning horse riding at Alaja farm (just outside of Ashgabat), who are famous for their strong and graceful Akhal Teke horses (the Turkmen people love their horses even more than their vodka!). Susan, who was a horsey child,  is really looking forward to this but Jill has serious reservations as her only horse based encounters have involved falling off them, usually into something spiky. In the afternoon we will visit Kow Ata – an underground lake in a cave (also just outside of Ashgabat) that is always around 30 degrees (due to sulphuric gases from the rocks) for a nice swim and to see Central Asia’s largest colony of bats that also live in the cave!  Another evening and night in Ashgabat.

We have a driver for this part of the tour  (luxury!) and will be leaving Ashgabat by car and travelling into the Karakum desert, stopping at the Erbent Oasis where we will hopefully see some nomads, milk some camels and touch some of their beautiful Tazys (traditional Turkmen hunting dogs that are quite similar to Afghans). . From there we will continue North via the mud and water craters  then spend the night camping next to the Gates of Hell gas crater in a yurt, celebrating Susan’s birthday at midnight and hopefully avoiding getting bitten by Caspian Cobras. We really can’t wait for this – it’s going to be epic!

END_OF_DOCUMENT_TOKEN_TO_BE_REPLACED 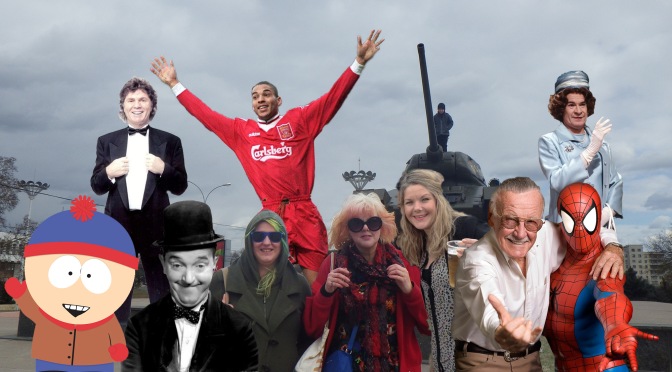 You all may be thinking that it’s been a bit quiet on the Pinge and Wang front recently (we admit it and we’re sorry – we’re never going to get on Ellen at this rate with this lack of commitment to our social media outlets and with our knees at our time of life!!!) but behind the scenes it has been a hive of activity, working away to finalise the itinerary for this year’s amazing trip: The Stannering. We’ve come up against a lot of obstacles – closed borders, routes, visas etc… It’s been a logistical nightmare, but now we are basking in the warm glow of having proposed another fabulous trajectory that would make Peter Powell proud!

We’ve also had no end of bother with bureaucracy, involving Jill having to get a new passport (because Uzbekistan refused her visa with the scruffy, beef sauce covered, guilty-stamped one that has been with us on all our previous adventures), Susan having to take a day trip to Northern Ireland to buy return UK postage for her Uzbek and Tajikstan visas (but getting a fun evening in dubious bars in Newry being fought over by old men out of it) and being concerned about Turkmenistan’s fear of good for nothing Latvians.

Oh yes! We forgot to tell you! We have a companion for the first (and maybe second) leg of this trip – our lovely friend Vita will be joining us as we rock the shit out of Turkmenistan! You know that usually we’re partners in crime and don’t want anyone else along for the ride (and no one else could put up with us to be honest), but this year is kind of special as it’s Susan’s 40th birthday! She had wanted to spend it on the moon, but budget tourist space flights aren’t a thing quite yet so she’s settled for camping at the Gates of Hell in Turkmenistan as the next best thing (“Turkmenistan – the next best thing to the moon” – Turkmen Tourist Board, you can use that if you like!) and invited a few close friends along for that leg of the trip. BUT, our Turkmen tour organiser (you can’t get a visa without an organised tour – booo) has warned us that it is unlikely that Vita will be issued a visa as Turkmenistan think that “people from all ex-soviet countries are trouble makers”! The cheek! Of course, Vita is no trouble maker and we’re hoping that he’s talking bollocks (the Turkmen Embassy in London seemed to think when we asked!) and that the consul will be won over by her very angelic-looking visa photos!

So the progress report for the day is so far we have: finished the trajectory, booked the tour in Turkmenistan, booked the Almaty- Yerevan flights and applied for Uzbekistan visas (Jill for the 2nd time!). Shit’s starting to get reeeeeal!!!