Jill was happy we’d managed an early (ish of 2am) the previous night but Susan was still of the opinion we should have gone to a tittie bar (even though we’d seen plenty in the bath house earlier that day) when we were rudely awoken by the dustmen at about 8am on the Wednesday morning, as we’d ordered a taxi for 9ish to take us into Tblisi city centre where we would be picked up in a minibus (at the statue of St George next to Rustaveli metro) and taken to Vanilla Sky’s little airstrip outside of town for our terribly commercial flight on a 2 person plane up to the mountain village of Mestia in the Svaneti region of Georgia. Susan was convinced we had tons of time and had snoozed the alarm which lead to Jill getting very anxious and impatient, convinced we were going to miss the flight and she’d had just about enough of missing flights this trip, thank you very much. It was a good 20-30 minutes in the taxi from the hotel to the city centre, and then the taxi driver drove straight past Rustaveli and had to double back around the one way system, so we were starting to really panic! We had been told to look for a “white Mercedes Sprinter” and were relieved to find loads of them waiting near the statue when we finally got there. Unfortunately NONE of them were our Vanilla Sky minibus and one of the taxi drivers told us we had just missed it, so we jumped in and told him to catch up with it! We ended up getting there in good time for the flight still thankfully, the weather was decent so the flight was going ahead and and we flopped ourselves down in the comfy chairs in the waiting room, swigged some breakfast beer and petted the two resident airport toy poodles that were mincing about being adorable. Seriously, take note Ryanair – Our research has shown that customers find the whole airport experience a lot less stressful if you provide them with poodles to touch!

Scampy airport poodles for the win!

We bonded over poodle touching and breakfast beer with Liz and Andy, a lovely couple (both journalists from That London but living in Ankara in Turkey and you can read Liz’s very interesting blog here) around our age who were also going to Mestia and were soon to become our new BFFs while we were there. After a short wait we boarded the tiny 15 seater turbo prop plane, which was too small even to stand up straight in. The pilot told the four big burly (and seemingly quite drunk) Russian blokes in front of us to sit at the front of the plane, we assume for ballast, but this didn’t stop them from trying to walk around and get into the cockpit/chair at the front once we’d taken off. It was too loud in the plane to really talk, but we attempted to continue our conversation with Liz and Andy by yelling over the sound of the engine and the drunk Russians, who were also shouting at each other. Top plane camaraderie achieved! 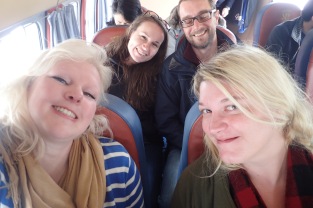 Us with our new craic commandos, Liz and Andy

END_OF_DOCUMENT_TOKEN_TO_BE_REPLACED

Thank Parmaynu for huge orthopaedic mattresses and Thai ladies with their business men massages as for once we woke up all refreshed after a much needed (after barely any sleep on the night train from Yerevan before) night’s sleep splattsed out in a nice comfy bed. We spent it wisely by pottering about our living room having breakfast beers and watching rubbish Russian music channels while getting ready. Today we were off out to properly explore Tbilisi – we liked what we’d seen of it the previous day but didn’t really have much of a chance to enjoy it as we were busy trying to sort out our plane tickets, but today we had no obligations and no plans other than to explore at our own pace and chill out in the sun on some nice terraces.

We got the metro to Rustaveli station, which looked to be the central hub for the city, and promptly found a little kiosk with tables and chairs outside in the sun and had a couple of beers there while looking at our map and deciding where to go next. 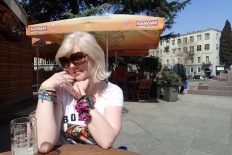 Decision beers in the sunshine

The old town seemed like the best bet, and there seemed to be loads of little bars and restaurants with terraces so we headed for there. On the way we passed so many amazing souvenir shops and street stalls – along with the usual fridge magnets and snow globes-type tourist tat, there were some great drinking horns, swords, daggers and ornate goblets that were pretty reasonably priced! Susan got some nice jewellery for presents and made a mental note of our favourite horn/dagger/goblet shops so we could come back later and pick up some good stuff to take home.

“Can you tell me where the monument is please?” 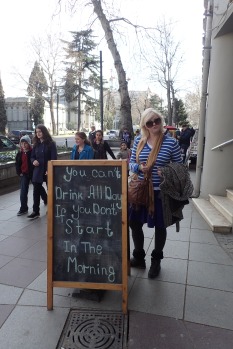 A fine selection of books

Feels like it should have a statue of Lenin outside

END_OF_DOCUMENT_TOKEN_TO_BE_REPLACED 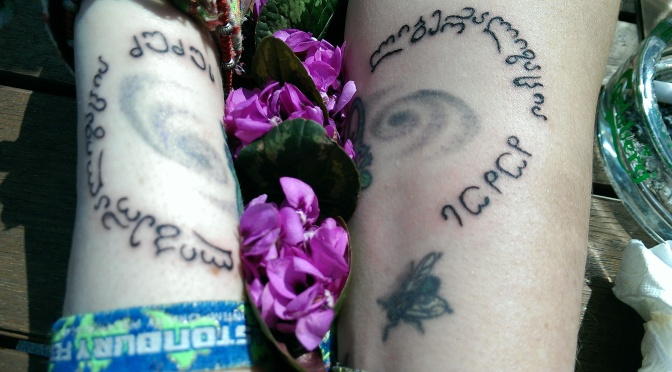 After travelling from Yerevan to our first stop in Georgia, Tbilisi, enduring the heat in our night train compartment the evening before from the inability to leave the door next to the window open in case Mr. Anal Secret came in and tried it on again, we emerged rather groggily from Tbilisi station to a nice sunny day and were immediately swarmed by pushy taxi drivers, which is not what you want at the best of times but especially not when you’ve just woke up after hardly any sleep and are in a new place and don’t even really know where you’re actually going yet! So we dived into a little bakery/café outside the station and had a breakfast beer while formulating a plan for the day. In the meantime, the little old baker dragged Susan up for a bit of a dance to some Phil Collins on the radio which was hilarious until his hands got a bit frisky and she had to slap him, which all the other staff behind the counter thought was even more hilarious but seriously – what is it with these lecherous old men around these parts?

END_OF_DOCUMENT_TOKEN_TO_BE_REPLACED

After bumping and grinding the night away in a dubious cellar club with the locals in Yerevan the previous night it was a dream come true to lounge around in bed the next day, totally missing seeing anything as we are wont to do once we have a booze in us. Our night train to Tbilisi wasn’t until 10.30pm so we’d both just enjoyed what we thought was a nice respectable lie in as we’d assumed that the other people in the dorm getting up and moving about would rouse us at a decent time, but as the ones that had got up were quiet as mice and the other ones were sleeping all day too, it was already evening when Susan checked her phone and realised what time it was! Thankfully we had slept away our hangovers (as well as the entire day) so we immediately packed up our gear, grabbed the rest of our food and drinks from the fridge and headed for the station as although there was still a few hours to go, we wanted to be sure that we got tickets as we were already a day behind schedule (“every other day” night train not running on the day we wanted to get it). Thankfully the tickets weren’t a problem and we even splashed out on a 1st class private cabin for a very reasonable €33. Once they were purchased, we stocked up on a fine selection of vodka, juices, kebabs, sausages and pastries for the train in the little shops in the subway.

We then attempted to find a bar nearby where we could kill the remaining couple of hours until it was time for the train but unfortunately it was at this point that it started to absolutely lash it down, and we couldn’t find a bar anywhere! Even google maps was coming up with nothing in the area and we were getting drenched and grumpy trudging around the streets with our rucksacks in tow, so decided to go into the fast food joint that was just on the corner close to the station in the hope that they sold beer. To our surprise it did, and it smelled really good in there so we ordered some beers, falafel for Jill and a veggie burger for Susan. She’d been quite lucky in Armenia as it was conveniently lent so lots of places had a “Lenten” vegetarian option for those who had decided to abstain from meat. We perched next to the window to watch the world go by while we enjoyed our food and drink and did a quick facebook update to let our friends know we were still alive, since we hadn’t been in touch with anyone since before we’d left for the wilds of Nagorno-Karabakh. It was at this point that a dodgy little old man came up and started talking away to us. Now you know we love a nice friendly old man, but he kept pointing to our beers and then himself and then the bar and we thought he meant he wanted to buy us one, but it soon became apparent that he wanted us to buy HIM one. We wouldn’t have been averse to treating him to a booze but then he started stroking Susan’s leg so since we didn’t know “go away” in Armenian, we decided to head for the train as it was about due to arrive anyway. Said dodgy old man followed us all the way to the platform, now asking us for money, and then onto the TRAIN and only finally left us alone when we found our compartment and locked the door. You give old meeeen, a bad name! And we hardly had any Armenian drams left anyway since we were going to be in Georgia when we woke up the next day!

Our snug bar/boudoir for the evening