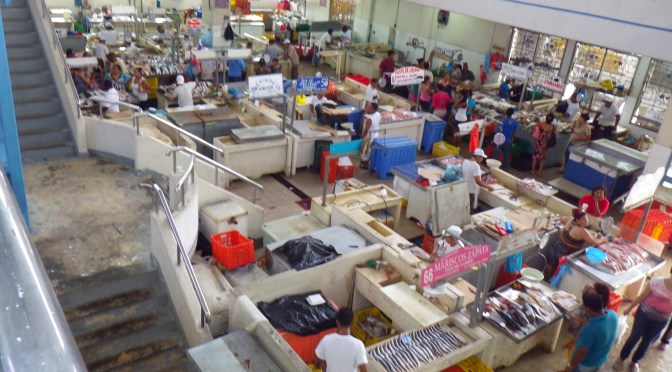 We were up and about in good time to catch our flight to Panama City (with only mild hangovers and slight lack of sleep due to the lairy drunken young men and women that had rolled in at god knows when and continued to drink and splash about flirtatiously in the pool and were still going when we got our taxi to the airport – oh the exuberance of youth!

On arrival in Panama City our first stop was of course the Panama Canal, where we had a couple of overpriced beers on the viewing terrace on the roof of the visitors’ centre hoping to see some ships coming in and going out again. A few little boats came through, but we really wanted to see a massive ship going through the huge lock. We retreated down to the next level where there was a posh restaurant (where the waiting staff eyed us with suspicion/disapproval as we trundled in with our scruffy backpacks) and a proper terrace with seats on as we’d both just been paid and fancied treating ourselves on our last day. Unfortunately there was no menu on, only a buffet which we didn’t really fancy (and the whole roast piglet sat on the table as a centre piece offended Susan’s vegetarian sensibilities) so we just found ourselves a table out on the terrace and enjoyed a couple of bottles of prosecco while keeping an eye out for some big ship/lock action. Unfortunately we were big ship denied, and as we were getting a bit peckish, we got a taxi to the next stop on our itinerary – the Mercado de Mariscos (the fish market),

The restaurant at the fish market had been recommended to us both by the Lonely Planet and a group of gap year students from That The South we’d met on the zip-lining tour in Monteverde (the likes of whom we normally can’t stand but this lot were really canny and made us feel a bit guilty for being so judgmental). As the taxi dropped us in the car park of the fish market, Susan opened the taxi door just as a little old bloke came careering round the corner with his wheelbarrow full of fish, and he tipped his fish cart over trying to avoid contact betwixt fish cart and taxi door, spilling his fish. We felt really bad about it (although it was a total accident) and wanted to help sort it out but he shooed us away, so we continued up the steps to the restaurant at the top of the fish market, adding a new verse to our whammy Belizian hit “Ow pet, don’t knock over me fish cart, ooooo-oooh”.

Now this is a place that we would only recommend for people that LOVE seafood! The restaurant itself is a little cafeteria style place on a mezzanine balcony overlooking the fish market below. There is of course the expected pungent aroma of fish, as well as the hubbub of the busy market which may not be everyone’s idea of a nice relaxing sit down meal but it’s great to just watch the hustle and bustle.  Jill really loves seafood and since Susan had had to let her vegetarian standards slide once or twice already this trip and eaten fish (to avoid yet another portion of chips for dinner), she was game too. Once we finally got the attention of the waiter, we ordered a bottle of wine, shrimp, spider crab squid and a bowl each of the delicious sounding “Levante Lazaro” (“Wake up Lazarus”) soup which claimed to be a fabulous hangover cure. Our starters were HUGE – Susan’s was pretty much a massive vase full to the brim with shrimp and Jill’s got a gigantic plate of crunchy squid tentacles – we began to think that maybe we should have just ordered the one soup to share! Susan didn’t much care for the soup (it being heavy on the old coriander, and of course she was full) but Jill absolutely loved it (and wishes she could get the recipe – it was hot and tangy with all the seafood you could imagine) and did her best to finish both bowls to no avail as she was already stuffed from having to help Susan with the excess shrimp i.e. everything after two mouthfuls.

We finished and paid up and flagged another taxi down outside. With no solid plans at this point and still a few hours to kill until we had to go for our flight (boooo!), we asked the taxi driver to take us to a place with a nice terrace and good cocktails. He took us to a great bar (where many giant margaritas were imbibed) and agreed to come back for us in an hour to take us to the airport.

It was a day of mixed emotions as we were enjoying reminiscing over the last couple of weeks adventures – we’d seen so much, met so many great people and had so many awesome “once in a lifetime” experiences (volcano boarding, zip-lining across the cloud forest canopy, snorkelling with sharks, turtles and rays, hiking in the jungle, Mayan ruins, Caribbean pirate islands…), and we were so proud ourselves that our itinerary had been a success (on the most part, apart from a couple of hitches). It had been hard going, with there being no real transport schedule (especially compared to last year’s very efficient Eastern European trains) but we LOVED our chicken bus adventures. Susan still says to this day that she can’t fall asleep on a bus properly unless she’s squashed into a 2 person seat with three people, her rucksack on her knees, someone’s baby on her shoulder and being woken up every half hour to be sold toothpaste/parasite tablets/blu loo. But of course there was the inevitable depression of going home and back to work.

Our lovely taxi driver turned up exactly on schedule (which was no surprise as we’d actually seen him just sitting in his car across the road waiting bless him) and we treated him to a rousing chorus of “The Yeah Yeah Yeah Song” by the Flaming Lips (which I’m sure he loved haha!) en route to the airport. We had to go to the KLM desk to ask them what we needed to do about our luggage, since we had originally booked us both on Panama – Schipol – Newcastle flights but Susan had later got herself an Aer Lingus flight from Schipol to Dublin to save her the extra leg getting home. The lad on the desk was lovely and said it wasn’t a problem, it would just go to Newcastle without her (which wasn’t that much of a hardship as she was planning to come back home soon anyway and could pick it up). We then made our way to the bar where we got bought Margaritas and shots of tequila by a lovely business man from Madrid.

The flight was a bit of a nightmare as our seats were right at the back next to the wall so we couldn’t recline our seats but the blokes in front insisted on putting theirs back, squashing us further and harsh words were said. Said blokes also had with them a baby and a toddler which howled in unison for about the first two hours of the flight, before the attendant took pity on us all and moved them to a different section of the plane.

We said our farewells and went our separate ways at Schipol – Jill boarded the Newcastle flight and Susan made her way to the Aer Lingus lounge to wait for her Dublin flight. The Newcastle flight was about to take off, when Jill got called down to the front of the plane.

“Susan Baxter – she is not travelling on this flight?”
“No, she is on the Aer Lingus flight to Dublin instead”
“Well her luggage can’t be on the plane without her”
“The KLM desk at Panama City airport said it was fine for her luggage to go to Newcastle”
“I DON’T CARE WHAT THEY SAID IN PANAMA – IT’S NOT PERMITTED!”

And there followed more heated exchange, Jill telling them they could just take the luggage off and give Susan a shout on the airport announcments tannoy as she was only in the Aer Lingus lounge and would be happy to come and get it, but they refused to do that either….”You’re holding up the flight!” “No, YOU’RE holding up the flight – the solution is really simple! Why won’t you do it?”. In the end they took off Susan’s luggage with no further information on how she was to be reunited with it (“Please just try and announce it on the tannoy!” – blank stares from the man who just walked away) and the flight took off.

We both got home safe and sound later that day, but there followed a couple of weeks of strongly worded phone calls to KLM/Aer Lingus/Schipol airport by Susan before she could get someone to admit responsibility for her luggage, tell her it’s whereabouts and arrange to have her reunited with it. And when it DID turn up, her favourite trusty blue jacket (which was fastened into the top of the rucksack and that had seen many an adventure and festival) had gone.Unfortunately, all of the further strongly worded phone calls and emails fell on stony ground and she never got it back, so a slightly sour end to an amazing trip! 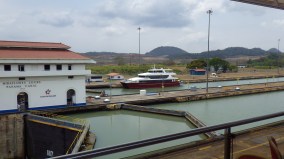 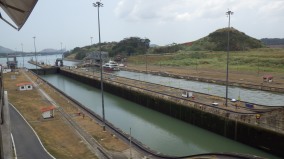 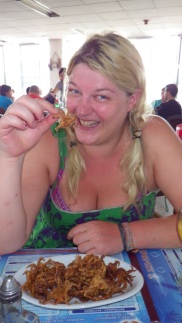 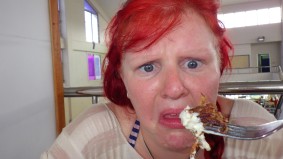 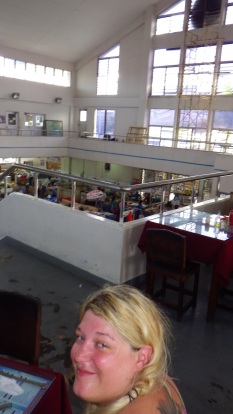 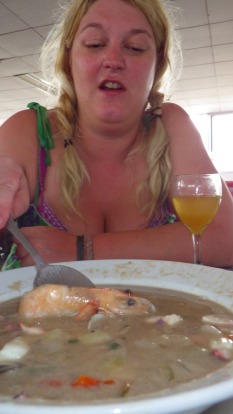