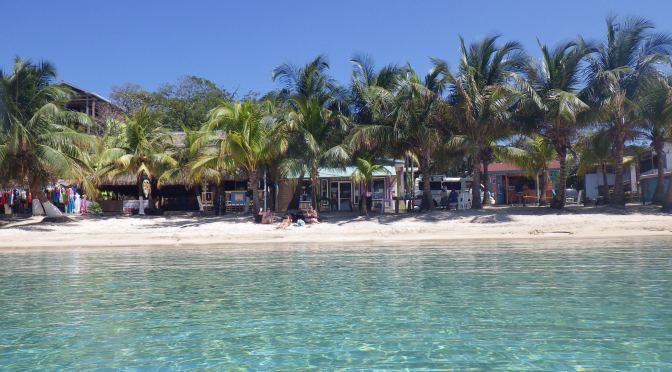 It’s been a mental few days! Our Paddys Day bender was a hoot, didn’t end up seeing any whale sharks due to all the boats having left by the time we sorted the flights out, instead we had a gorgeous day on the beach with our new friends Laird and Bonita who kindly lent us their snorkelling gear so we could a least get in the water and try to touch some animals. Retired back to the hotel to get changed and ended up drinking rum on the balcony with more awesome Canadians until Susan transformed into Mandible who demanded we headed down to Skid Row to do the Guifity shot challenge. Which we did. Can’t remember much else apart from riding around the island on a scooter and some fat american trying to kiss both of us.

The next day (Jill’s birthday) started with hideous hangovers at 7am when we had to leg it down to catch the boat to Roatan, where we met MORE great Canadians (Audrey and Janine) whose arms didn’t take much bending to persuade to join us in a mender on the boat ride, which Susan spent the best part of hanging over the side trying not to vom.

We ended up having a hoot on Roatan with the lasses and after sitting drinking and giggling for a couple of hours in the bar (Susan was miraculously revived by a margarita, after poopooing a variety of other boozes in favour of a nap). Roatan was absolutely stunning and we were glad we got to spend an afternoon here with the most amazing company (we had so many funny things in common with the girls and they were totally our sisters from other misters). We were all well topped up so wandered the five yards to the beach to have a dip and spent the rest of the afternoon swimming about, eating road barbecue and  snoozing under a palm tree until unfortunately it was time to taxi to the airport. Roatan airport is so tiny it makes Teeside look like LAX  and we were dismayed to find when we got through security (which was less secure than the flipping BUS had been!) that there was NEE BAR there! We had got there really early so it was an anxious hour to wait without boozes. Our plane to Tegucigalpa was also really wee and the flight over the mountains and rainforest was gut-wrenchingly beautiful.

We grabbed a taxi straight to our hotel in Tegus and pretty much straight to bed since the city is DUBIOUS as and not a place to be wandering at night, plus we were fucked from a day of hangover drinking and had a bus to catch at 5am (for which we had drawn many pictures for the receptionist to describe that we needed a taxi booked to take us there).

Managed to get the bus, which was quite luxurious and gave us breakfast, but took so bloody long at the Honduras-Nicaragua border we started to worry about making it to Leon for our 1pm volcano boarding. We made it there (after a few hours on a chicken bus) for about two and there was a truck full of people going volcano boarding outside so we thought we were in luck but alas it was a private tour and they wouldn’t let us go as they were nob islanders. Woooooe! The lovely lads from the hostel managed to arrange an 8am trip for the next day so we’d be back by one and would only have to make up half a day to get back on schedule. So we spent the rest of the afternoon drinking delicious mojitos and chatting to the bar staff and a canny local lad called Rene who we agreed to meet up with later so he could show us Leon’s good bars. Nicaragua is so welcoming and friendly (especially after the dubious on-edgeness of Honduras) we instantly loved it! Unfortunately we didn’t end up going out with him as Susan fell asleep when Jill went in the shower and couldn’t be revived through either slapping or trying to put mojitos in her face, but it had been an exhausting couple of days all round. And then Rene didn’t turn up anyway.

Anyway, more later as I am getting bitten alive and the tablet keyboard is playing silly buggers. We’re alive and well and currently on gorgeous Ometepe (aka Twin Peaks Monkey Island) staying in a luxury hotel where the towels were sculpted into swans, although there is a gecko living in Jill’s bed, from the Central American regiment of Susan’s Asian gecko army.